Steve and Jacob went to Home Depot to gather supplies for a Saturday project.  Zachary and Andrew were slowly moving about the house.  And I was happily mixing batter relishing in the fact that I could move as slowly as I wanted.  Because we had nowhere to be.

The smell of bacon was making its way through the house, the oven fan hummed a consistent tune, and I listened and waited patiently as the cast iron griddle heated to the point of sounding off soft pops of oil.  I filled the measuring cup to pour the perfect sized pancake and quickly moved my hand over the griddle trying my best to keep all the batter on the pan.  Before I had the chance to pour the batter, a small dollop escaped the cup onto the pan.  I had already poured out the remainder of the cup onto the griddle when I realized this small circle of batter on the edge of the pan.

The slow invites the moments in, it welcomes the memories home.  The moments, the memories, they want to be cherished, remembered.  Not rushed past.

A memory was triggered.  The slow allowed me to relish in it.

I was transported back to when I was a little girl and my mom would bring out a steaming hot batch of homemade biscuits.  My mom, hands down, makes the best biscuits I’ve ever tasted.  She was taught by my great-grandmother and my grandmother.  Sadly, I’ve tried and tried but can’t make biscuits like my mom can.  Maybe that’s the way it should be.  Maybe they should just be “Nanny’s biscuits” to my boys.  Something unique and special to her that they only get from her.

There I sat, hair pulled in pig tails, with my eyes fixed on the plate being placed in the center of the table.  My eyes were searching for one thing and one thing only.  The baby biscuit.  It was always there.  Waiting for me.  Well, actually there were 2, one for me and one for my sister.  But I was searching for my baby biscuit.

The baby biscuit was special.  It was tiny, drastically different from every other biscuit on the plate.  Extra thought was given to which biscuit would become my biscuit.  That small act, repeated time after time after time, took no extra effort on the part of my mom.  The message that penetrated to my heart was one of love.  To me, she took the extra step to show me she loved me and cared enough to do a little something special.

The baby biscuits never really ended either.  Weekends home from college, I still was given a baby biscuit.  In my mom’s eyes, I would always be her little girl wanting her mom’s baby biscuit.  It had become a tradition, and traditions are meant to be passed down.  If you visit my mom’s house, she has a picture frame with each of her grandbabies eating their very own baby biscuit.

While the nostalgia was flooding me, pancakes began stacking high on the plate.  Boys began wandering in questioning how much longer they must be tortured by the smells they couldn’t escape.  Jokingly, I handed Andrew the “mistake” pancake.  The baby pancake.  I expected him to moan and complain that it was too little and he wanted a bigger one.  Instead, his little eyes lit up at his “special” pancake.

Traditions don’t have to be monumental events.  Sometimes the most heartwarming of traditions come in the smallest packages.  Like that of a baby biscuit.

When Your Christmas Season Doesn't Go According To Plan 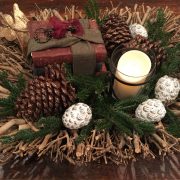 The "Best of" Christmas Posts - Tips to simplify, celebrate, serve, cherish, and give

When family bonds reach outside their own

Money Moments A Hug From God
Scroll to top